Cooking is more fun with friends. Invite your friends to join Slurrp Community and share your special recipes with them
test
All About The Traditional African Dessert, Malva Pudding
Updated : October 31, 2022 18:10 IST
Share
Traditionally, the dish is served warm, with ice cream, whipped cream, or vanilla custard on the side.
Malva pudding is a typical South African dish comprised of a pudding base topped with a creamy, sweet sauce made of water, milk, vanilla, butter, and sugar. Typically, the pudding is made using butter, sugar, eggs, apricot jam, milk, flour, and salt. Traditionally, the dish is served warm, with ice cream, whipped cream, or vanilla custard on the side. The dish is thought to be named malva pudding after the Afrikaans term malva, which means marshmallow, referring to the similarities between marshmallows and the texture of the pudding, however, some suggest the name is derived from the fact that the pudding used to contain Malvasia wine.
The Origins
Malva pudding has distinctly Dutch origins. Dutch colonists brought the pudding to South Africa when they arrived in the mid-1600s, largely in connection with Dutch East India voyages. In some ways, the dessert provided a taste of home for European families establishing a colony in Africa’s hot and arid climate. Baking was not widely practised among the indigenous peoples of the time. Apricots were also plentiful, bursting forth from the trees every summer.
Although the pudding can still be found in some forms in the Netherlands, it is now firmly established in South African cuisine. It is now popular among all residents, both South Africans and those of European origin. The ingredients are simple, and the pudding is simple enough for even a novice cook to make.
What Makes The Malva Pudding?
The egg yolks and high jam concentration give Malva pudding a soft, sponge-like custard texture. As a result, the meal is classified as a pudding rather than a cake. Though the pudding can be served on its own, sliced into rough wedges, or scooped into shallow bowls, many chefs like to pair it with a thick cream sauce.
It is customary to make cream sauce, which is commonly flavoured with vanilla, as the pudding finishes cooking. As soon as the pudding comes out of the oven, cooks will poke small holes in the top and pour the warmed cream sauce over the top. As the sauce cools, it will sink into the holes and absorb directly into the malva pudding. It is usual to save some sauce aside to sprinkle over the final presentation. 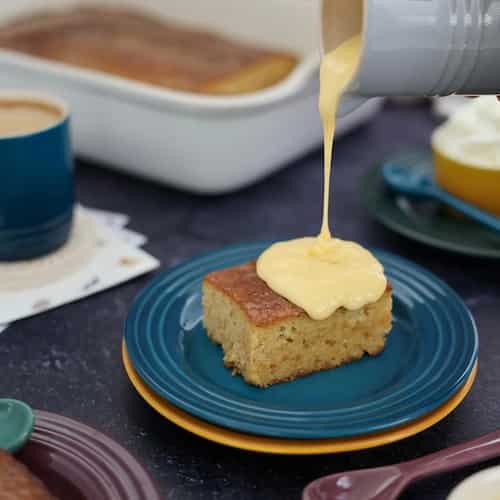 Vanilla ice cream is a popular substitute for warmed cream sauce, especially during the summer months. Chefs who serve malva pudding with ice cream frequently conclude with a brandy apricot sauce. Apricot halves that have been glazed or preserved are likewise a popular complement.
Download the free Slurrp app.
©2022 Slurrp, HT Media Labs. All rights reserved.
Slurrp is a recipe aggregator that helps one find recipes based on one’s diet choices, fitness goals and taste preferences. It provides calorie-counted recipes across cuisines and meals types and caters to all levels of cooking skills — from a beginner to an expert. It also offers a nutrimeter that calculates the precise nutrient intake based on the user’s height and weight to recommend recipes for each meal. Once you’ve shortlisted recipes that you want to prepare, you can also add them to your Meal Plan which pins your recipes on the calendar so you can plan your meals in advance.