The Piet Mondrian masterpiece Composition No. II from 1930 is on the docket for Sotheby’s Modern Evening Auction Nov. 14. The work is expected to sell for at least $50 million, exceeding the current record for paintings by Mondrian.

It is very uncommon for Mondrian’s artworks from his mature period in the 1920 and 1930s to go up for auction. They are usually housed in museum collections, given their significance to the progression of modern art. Composition No. II is particularly rare due to the use of the color red, which Mondrian used sparingly during his mature period.
Composition No. II was briefly exhibited in Paris in 1930, the same year the painting was finished, and it wouldn’t appear again in public until the 1950’s, when art collectors Armand and Celeste Bartos lent the piece for viewings in New York City. The couple later sold the painting at auction to another private collector in 1983 and it has been out of the public eye since. For serious collectors, next week’s sale is a unique opportunity to own one of Mondrian’s most sought after works.
Mondrian, who was Dutch and lived from 1872 to 1944, was a pioneer of modern art. Over his career his artwork became increasingly abstract, leading to his most recognizable era of simple geometric designs with rich primary colors. Works such as Composition No. II are characteristic of the De Stijl (The Style) movement, which Mondrian co-founded with other Dutch artists. This artistic movement subsequently influenced other styles, such as Color Field paintings, abstract impression, and minimalism.

Mondrian ranks only with Picasso for influence in modern art

Peter Schjeldahl, an American art critic, believed Mondrian to be one of the most influential artists of the 20th century, ranking alongside Pablo Picasso. In one of his final articles for the New Yorker before his death last month, Schjeldahl wrote “Pablo Picasso and Piet Mondrian are, to me, the twin groundbreakers of twentieth-century European pictorial art: Picasso the greatest painter who modernized picture-making, and Mondrian the greatest modernizer who painted.”

Mondrian and his works will continue to transcend changes in the world and in art, Schjeldahl wrote. “Critical attention to him may rise and fall. For anyone undertaking to pay it, though, there can be no ups or downs in Mondrian’s importance, relative to other artists past, present, and to come.”
The upcoming auction of Composition No. II could shatter the previous record for a Mondrian piece set back in 2015, at Christie’s auctioning of Composition No. III, with Red, Blue, Yellow, and Black (1929) for $50.5 million. The 1983 auction of Composition No. II once stood as Mondrian’s most expensive sale, when the piece was sold by Christie’s for $2 million to a Japanese collector. It was the highest price ever paid for an abstract artwork at the time. Composition No. II is now likely to reclaim the title as Mondrian’s most expensive painting. 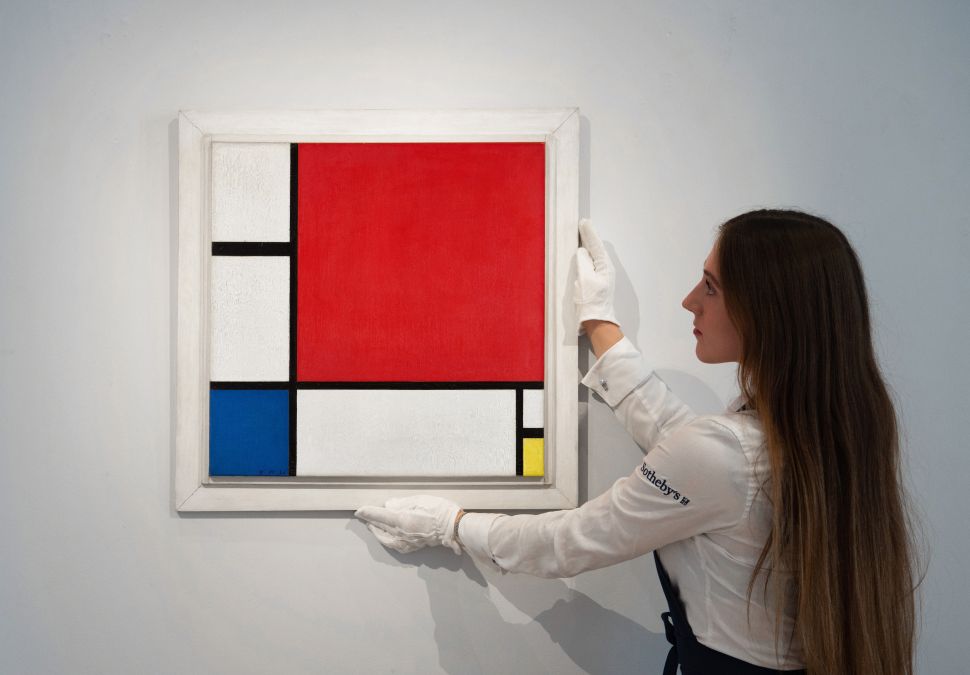 We get it: you like to have control of your own internet experience.
But advertising revenue helps support our journalism.