Food 4 Thought
3 min read
Eats
4 min read
Recipes
2 min read
Food 4 Thought
4 min read
5 min read
It is as deliciously diverse as its people.
The cuisine of South Africa’s Jewish community, as one might expect, is a unique mixture of traditional Ashkenazi foods and South Africa’s own indigenous ingredients, flavors and traditions. In many ways, the holiday and festival foods that South African Jews eat are very similar to the foods that Jews eat in North America – with a special emphasis on the Lithuanian version of Ashkenazi favorites. Sharon Lurie, a kosher food expert and cookbook author in Johannesburg, who writes cookbooks and hosts a cooking show in South Africa, explains:
Being of Lithuanian and Ashkenazi descent myself, my go-to foods on [holidays] are the traditional foods…that I grew up knowing such as chicken soup and kneidelach…, gefilte fish, fried fish, chrain, different types of herring, pickled cucumbers, chopped liver…and kugels.
Jewish stand-up comedian and caterer Tracy Ann Klass, echoes Lurie’s thoughts: “Yes, we do have the same dishes – tzimmes, potato kugel, the herrings, chopped liver, gefilte fish.” Dean Jankelowitz notes that there are a lot of Jewish delis in South Africa – “not quite Russ & Daughters but along those lines” – and that women like his grandmother Freda, “prepared the same Ashkenazi foods time and time again.”
Fish in general is a large part of South African Jewish cuisine. “We have such beautiful fish,” explains Klass. “so there are a few dishes that you don’t seem to find anywhere else or if you do, they are just not the same.” South African Jews are known to eat a lot of chopped herring – preferably on top of a thin, slightly sweet biscuit or cracker called kichel. Jankelowitz notes that this combination “chopped herring with a sweet cracker and beet horseradish on top,” is one of the few things that is very popular among South African Jews that he has not seen anywhere else. Get my recipe for South African Kichel here. 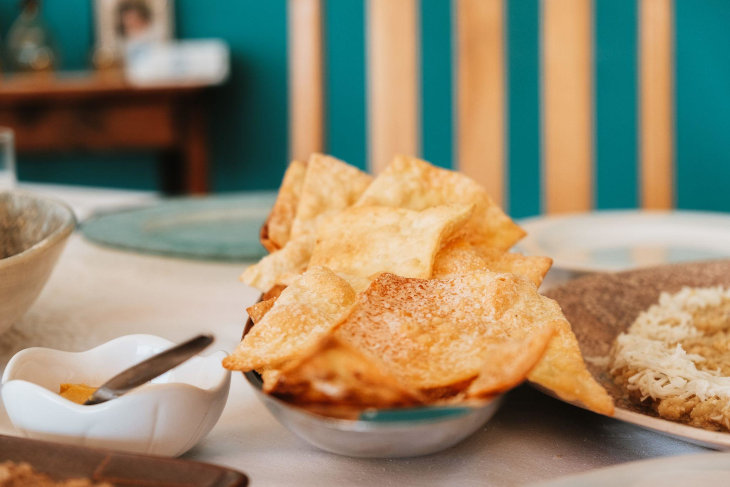 Another example of a food that is unique to South African Jews yet would seem familiar to lovers of Ashkenazi cuisine anywhere is smoked snoek pâté. Smoked fish is certainly a beloved part of the Ashkenazi food canon. Klass explains that “snoek is a fish found off the coast of South Africa. It is smoked and simply delicious. A great way to serve it – aside from just on a bagel with sliced tomato – is to make it into a snoek pâté.” Dean Jankelowitz agrees, noting that smoked snoek pâté served with bread or crackers is something you see at holiday and life cycle functions in South Africa, similar to the role of lox or whitefish salad in America.
Another quirk of South Africa’s Jewish community? They have a different name for challah. In South Africa, challah – which looks just like the challah found elsewhere – is known as kitke. No one is quite sure why.
There has been some immigration to South Africa from Israel in recent years, and as a result, Sephardi cuisine has been making inroads with the largely Ashkenazi population. Lurie, whose daughter-in-law is Sephardic, explains that “Sephardi cuisine, influenced by our Israeli community – including hummus, techina (tahini), matbucha, and eggplant salads – [is] a firm favorite on most Shabbos and yom tov tables.” Spicy Israeli dishes are not off-putting to South African Jews who are used to spicy foods as part of the local cuisine.
Indeed, South Africa’s Jewish community enjoys dining on the same South African dishes as their non-Jewish neighbors. South Africa, like the United States, has been shaped by the displacement of the native populations, colonization – from both the Dutch and the British – and generations of immigration from all over the world, particularly Europe and south Asia. As a result, the cuisine is incredibly varied and rich. Lurie explains that “South African cuisine is as deliciously diverse as its people.” Klass notes that “South Africa has the most incredible selection and range of food imaginable. The flavors are truly remarkable and our produce is just incredible.”
One South African tradition enjoyed by all is a braai – what Americans might call a barbecue or cookout. (The word “braai” seems to be both a noun and a verb, much like the word barbecue.) At a braai, one cooks over a grill, also called a braai, and usually eats outdoors as well. Klass explains that “we cook a huge range of food on the braai [like] corn bread, potatoes, steaks, chops, and boerewors, the best-tasting sausage in the world.” Lurie notes that South Africa is a meat-eating nation – although the seafood is excellent and varied as well – and that biltong, a kind of dried beef jerky, is another national favorite. “Wherever you find a community of South Africans, someone is making biltong and boerewors,” jokes Lurie.
This emphasis on beef means that it is possible to eat traditional South African foods and still keep kosher, notes Lurie, who is married to a kosher butcher. Her latest cookbook A Taste of South Africa with the Kosher Butcher’s Wife demonstrates that “cooking kosher and being South African are not mutually exclusive but rather easily inclusive,” Lurie claims.
The Dutch settlers or Afrikaners also influenced South African cuisine by introducing the all-important three-legged cast iron cooking pot known as a potjie kos.” These pots are used to cook dishes over an open fire for hours, explains Klass. 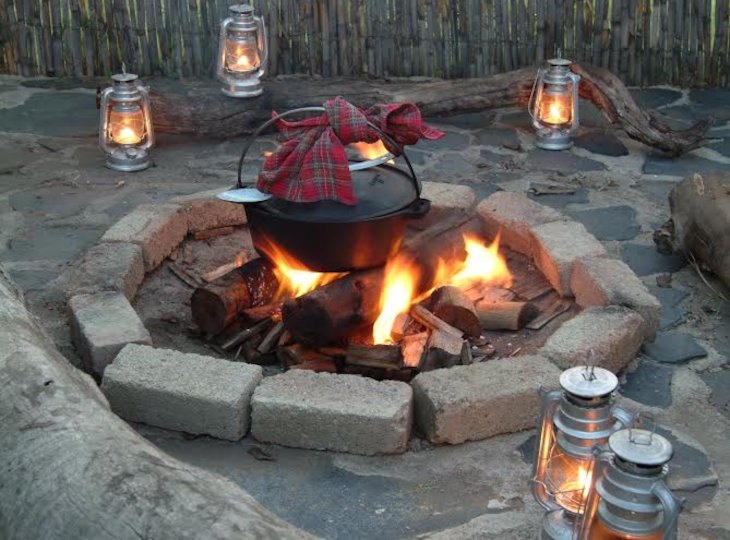 Potjie kos from Sharon Lurie
A favorite South African dessert, the melktert, which is a type of custard tart, is also Dutch in origin. Lurie says that she doesn’t “think there is [an oneg] after shul, in South Africa, that doesn’t have a traditional melktart (“milk tart’) on its table each week.” 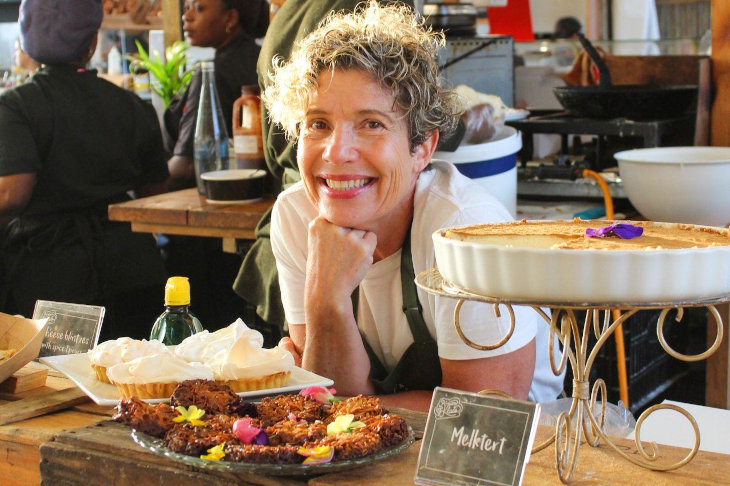 Tracy Ann Klass with Milk Tart
During the years that South Africa was part of the British Empire, huge waves of immigrants arrived from India, including famously Mahatma Gandhi for a time. As a result, there is a strong Indian influence on South African cuisine. One iconic South African dish is known as “bunny chow,” a curry served inside a loaf of bread for easy transport. In her book, Lurie calls Durban curry “a national treasure of a dish, known and loved around South Africa.” (85) Highly flavorful, tamarind-rich Cape Malay cuisine, which is unique to South Africa’s western Cape, combines the flavors and food from Malaysian, Indonesian and East African slaves who were forcibly brought to Cape Town by the Dutch in the 17th and 18th centuries. All of these cuisines are enjoyed by Jews as well.
One of South Africa’s best-known exports is the fast casual chicken restaurant chain Nando’s, known for spicy grilled chicken served with peri-peri sauce. (Peri-peri is the name for the African bird’s eye chili.) Nando’s demonstrates the Portuguese influence on South African cuisine. Dean Jankelowitz has been a fanatic for Nando’s ever since childhood. South Africa is home to Nando’s only kosher restaurant, which both Jankelowitz and Lurie say is constantly mobbed with people.
In short, South African cuisine is as complex as the history of this country, which has been a crossroads of the world for centuries. South Africa’s Jews enjoy all that their country has to offer from a culinary perspective as well as having their own unique spin on traditional Ashkenazi fare.  Read more about The Jews of Johannesburg: South Africa’s Thriving Jewish Community here.
Our weekly email is chockful of interesting and relevant insights into Jewish history, food, philosophy, current events, holidays and more..
More About The Author
Emily Paster
A lawyer turned food writer, Emily Paster brings passion, a sharp intellect and attention to detail to her globally-inspired, Jewish cuisine. She is the author of four cookbooks, including the best-selling Epic Air Fryer Cookbook. Her latest book is Instantly Mediterranean: Vibrant Satisfying Recipes for Your Instant Pot, Electric Pressure Cooker & Air Fryer, which came out in September 2021. Emily lives outside Chicago with her husband and two ravenous teenagers. Find more of Emily’s recipes on her blog West of the Loop.
Current
History
Jewlish
Philosophy
Life
Holidays
Current
History
Jewlish
Philosophy
Life
Holidays