New Zealand Herald
Subscribe to E-Newsletter
Follow us on Facebook
Follow us on Instagram
Follow us on Twitter
Though our dining landscape has changed, the Italian restaurant is reassuringly steadfast
COTTO
Cuisine: Italian
Address: 375 Karangahape Rd, central city
Contact: (09) 394 1555
From the menu: Smashed cucumber salad $7; roasted asparagus $17; spinach dumplings $17; rotolo pork shoulder $23; risotto $23
Drinks: Fully licensed
I last reviewed Cotto four years ago and since then it’s gone from Karangahape Rd oasis to just one of a dozen restaurants on the strip that can show you a good time.
Bar Celeste and Candela are both new since then, as are Atelier, Alta, East Street Hall, Satya Chai Lounge and Pici. When you add comparative OGs Madame George and Gemmayze Street, plus another handful of great options I could list without even picking up a pen and paper, you now need a good reason not to eat on K Rd.
If you want to know how much the area has changed since 2018, back then I arrived at the restaurant in my car and drove up and down the street until I found a park.
In the paradoxical manner of these things, the arrival of several great competitors hasn’t spread demand thin, but instead brought more customers to the area — the Brick Lane effect.
Cotto is as full as it’s ever been (I sneaked into a table on standby), a major head start when it comes to the vibe of the restaurant: it’s the right sort of noisy, with a happy mix of people enjoying a nosh and catching up on gossip between mouthfuls. This is where you’d take your younger sibling on their annual visit to Auckland — and if you went Dutch on the bill they’d still have cash left over for vape pods. 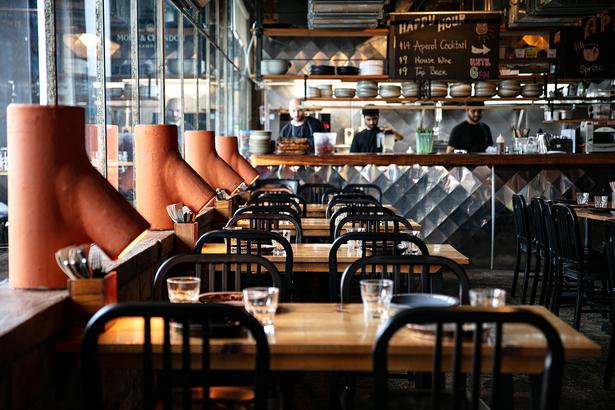 “Cotto is as full as it’s ever been (I sneaked into a table on standby), a major head start when it comes to the vibe of the restaurant: it’s the right sort of noisy, with a happy mix of people enjoying a nosh and catching up on gossip between mouthfuls.” Photo / Babiche Martens
The staff do a very good job of keeping up, even anticipating orders, and given we’re in the tightest labour market for 40 years you want to thank them for showing up to a demanding job instead of, I don’t know, making their money streaming Bananagrams on Twitch. Aside from one time when she misheard “blood orange pellegrino” for “blood orange negroni”, our waiter didn’t misstep all night.
I actually did order from the negroni menu and was a bit disappointed. There’s not much to mess up in a drink with equal portions of three ingredients but the ice cubes here are too small, which means the cocktail doesn’t get sufficiently cold.
Usually that would lead to over-dilution but nobody ever complained their negroni was too weak — it’s more just that it misses a sense of care behind your drink. When you’re paying $20 a pop you don’t want to feel like they’ve just poured it from a pre-mixed cask and sent it out to you, even if that is in fact the case.
My only other criticism is that the menu risks feeling a little unexciting after four years. There’s not a dud dish on there, to be clear, but it’s more a case of choosing from the classics than trying what’s new. When I asked for a recommendation the answer was “the dumplings”, a dish which hasn’t changed since the place opened.
I’m tempted to cut and paste my description from 2018 but that sort of thing doesn’t win Voyager Awards, so let me tell you that the dumplings aren’t filled pasta as you might expect but a delicious lumpy ball of goat’s cheese and ricotta, packed just tightly enough that it holds together, fried until the surface is just starting to brown and served in a simple sage butter. 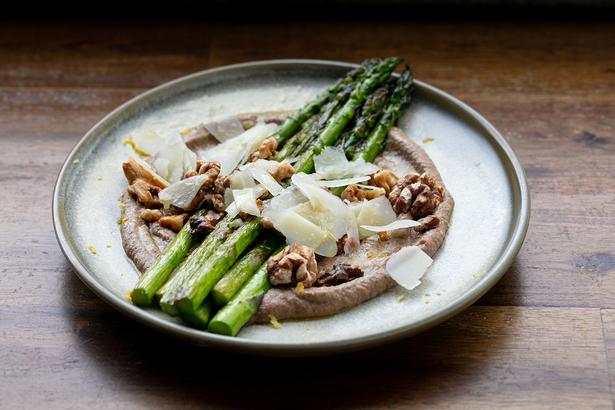 The roasted asparagus on walnut puree. Photo / Babiche Martens
It’s great but you need something fresh after that, and the cucumber salad is an awesome option. I love it when chefs treat ‘cuc’ as a star ingredient (the Chinese have been smashing and salting them for millenia, of course) and here they come with a great balance of accompaniments: creamy, stretchy stracciatella, some acid from a lemon vinaigrette and the occasional fragrant hit of fresh mint.
There are seasonal flourishes in Cotto’s specials menu (I always look forward to their sweetcorn dishes in late summer) and we had a delicious plate of asparagus, the kitchen taking a typically “more is more” approach with flavour, sitting the spears on a walnut puree with more nuts shattered and scattered over the top, along with fine sheets of pecorino.
You’ll never leave Cotto hungry, but if you’re worried, you should order the rotolo — sheet pasta rolled around a braise of watercress and pork then sliced and served up on cannellini puree with a bright salsa verde. We also shared a great risotto — as with the pasta they take al dente seriously here, and I love the feel of those individual grains of just-cooked rice between my teeth, with more stracciatella, plenty of soupy stock and the season’s first cherry tomatoes — red and yellow — cutting through one of the world’s great comfort foods.
Mobility access is pretty handy from the street if you can get some help with the doors, and staff have a table and a plan in place for wheelchairs. This forms part of what seems like a general commitment to excellence and to not taking their popularity for granted.
There are fresher, hotter places on K Rd but Cotto fits well into its new role as a trusty old friend.
The Korean eatery was alive from the moment I walked in
Every new arrival prompted groans which, while not erotic, weren’t unerotic either
The Auckland iteration of Melbourne’s extraordinarily famous restaurant has tapas you won’t want to share
Find sensational flavours and a room full of rabbits at this Milford newcomer
Courgettes, Truffle Oil & Parmesan Make For A Rich, No-Fuss Pasta
Cotto Is Like A Trusty Old Friend
Honey & Sesame Come Together In This Crispy Pumpkin Dish
Jesse Mulligan Dines Across New York City
Easy Recipes & An Effortless Ingredient Make Life A Breeze
This Scallop, Ginger & Apple Salad Makes For A Nice, Light Meal
The Very Dishy Life Of Albert Cho
A Strawberry-Raspberry Fool To Cool You Down & Pick You Up
Dear Jervois Is Beloved By Locals
Cibo Is Fancy, Meaty And Saucy, And Pitch Perfect
© Copyright 2015 NZME. Publishing Ltd
Part of NZME. network
New Zealand Herald
Subscribe to E-Newsletter
Follow us on Facebook
Follow us on Instagram
Follow us on Twitter