Yesterday · 3 min read
Aaron Spangler, a sculptor and printmaker best known for monumental carved wooden sculptures and for making contemporary the traditional art of bas relief, will present the next Hixson-Lied Visiting Scholar Lecture at 5:30 p.m. Nov. 30 in Richards Hall, Room 15.
The lecture is free and open to the public.
Spangler’s themes emerge from his rural roots in northern Minnesota, and his first bas reliefs (carved with a sharpened screwdriver) turned darkly calamitous, chaotic and monochromatic when he moved to New York City in 1999. The work in his first solo shows at Zach Feuer in Chelsea in the early 2000s was full of enigmatic, often surrealistic narrative scenes—twisted tree roots, limbs and extinct hand tools—that illustrated various social and political breakdowns of rural society.
Since moving back home to his house and studio in the Two Inlets Forest in Minnesota in 2009, his work has grown in a more smoothly abstracted, heavily patterned, and intimate direction. In bas relief, freestanding sculpture and in woodblock and hand-rubbed prints, he continues to explore and provoke the ineffable truths and mythologies of the rural ethos. 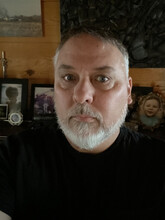 Since 1998 Spangler’s work has been the subject of many national and international exhibitions, including solo shows in galleries in New York and Berlin. In recent years he’s been included in group shows such as “Working Thought” at The Carnegie Museum of Art, Pittsburgh; Takashi Murakami’s “Superflat Collection,” Yokohama, Japan; the two-person “American Gothic” at Southeastern Center for Contemporary Art (with Alison Elizabeth Taylor), Winston-Salem, N.C.; “Spectacular of Vernacular” (2011–12), Walker Art Center, Minneapolis; “Heartland” (2008–10), Van Abbemuseum, Eindhoven, the Netherlands; and the Smart Museum of Art, University of Chicago.
His work belongs to many public and private collections, including The Whitney Museum of American Art, the Hammer Museum, and the Rubell Family Collection, among others. He has received grants from the Joan Mitchell Foundation (2014), McKnight Foundation (2009), Minnesota State Arts Board (1998) and Jerome Foundation (1997). In 2017, Spangler’s first large-scale bronze, “Bog Walker,” was commissioned by Walker Art Center for the Minneapolis Sculpture Garden.
In a volunteer capacity, Spangler advises and curates exhibitions for the Nemeth Art Center, housed in the historic Hubbard County courthouse.
The University of Nebraska–Lincoln School of Art, Art History and Design’s Hixson-Lied Visiting Artist and Scholar Lecture Series brings notable artists, scholars and designers to Nebraska each semester to enhance the education of students.
Underwritten by the Hixson-Lied Endowment with additional support from other sources, the series enriches the culture of the state by providing a way for Nebraskans to interact with luminaries in the fields of art, art history and design. Each visiting artist or scholar spends one to three days on campus to meet with classes, participate in critiques and give demonstrations.
For more information on the series, contact the School of Art, Art History and Design at 402-472-5522 or e-mail schoolaahd@unl.edu.
Some parts of this site work best with JavaScript enabled.