The Department of Music, Theatre and Dance is proud to present a special performance that celebrates connections across the continuum of Black American jazz dance with the works of three celebrated choreographers, dancers and teachers. The Salve Regina community and the general public are invited to attend.
This performance will include excerpts from a musical in progress entitled “Hattie Mae’s Jook Joint” by Alvon Reed; a solo from Duane Lee Holland, Jr.’s one-man show “The Adventures of Maxx Lancaster;” and an original dance piece choreographed by Carlos R.A. Jones. Salve Regina’s dance students will also perform hip hop and house works choreographed by Holland.
Conversation and context on Black American identity and culture is integral to this performance, with a pre-show speech by Carlos R. A. Jones and a post-performance conversation with Reed, Holland and Jones.
The performances will happen on Thursday, Nov. 10, at 8 p.m. and Saturday, Nov. 12, at 2 p.m. Tickets are free for Salve Regina faculty, staff and students; $15 for general admission; and $10 for military, seniors and children under 12. To register, go here.
“Hattie Mae’s Jook Joint” is the brainchild of Alvon Reed, who is an assistant professor of Musical Theatre at The University of Alabama, as well as a celebrated dancer and choreographer. Reed has been doing a six-week residency within the dance program at Salve Regina over the course of this fall 2022 semester, where he has been teaching several jazz classes and workshopping his choreography.
Alvon Reed
Over the past few years, Reed has been developing an original musical entitled “Hattie Mae’s Jook Joint” as a nod to something with roots in 1940s Southern Black culture: jook joints.
“If people are unfamiliar with jook joint, they’re really like these hole-in-the-wall places that are off the beaten path,” said Reed. “Jook joints are generally a space where people seek refuge from daily life, and what comes out of the jook joint is Black culture like music, dance, food—with a huge emphasis on music within these contexts.”
At one point, jook joints became extremely popular across the country, but there are probably now about 50-100 left, according to Reed. Reed decided to write a musical to explore the legacy of jook joints and to raise awareness for the importance they have within Black culture, as well as American culture as a whole. 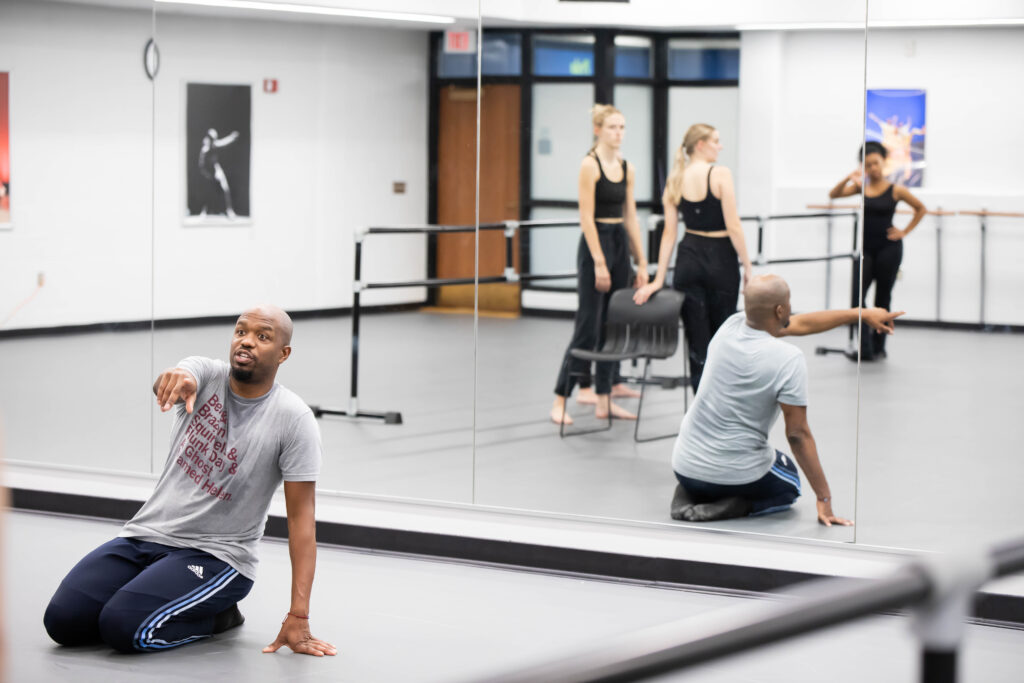 Salve Regina dancers participate in a dress rehearsal for “Hattie Mae’s Jook Joint” with guest artist in residence, Alvon Reed.
What audience members will see are three pieces from the musical that Salve Regina’s students have practiced over the past six weeks of Reed’s residency for the University, including thirteen dancers, three female student vocalists. Salve Regina’s jazz combo — led by Peter Davis, senior lecturer and music program coordinator, and Michael Johnson, adjunct faculty in the music program — will play live music for the show.  Two guest performers are also in the cast: Harlem-based Broadway-performer Jaquez Sims and Robert Solomon from Newport, Rhode Island.
Alongside the three pieces from Hattie Mae’s Jook Joint will be a solo performance by Duane Lee Holland, Jr. and a piece choreographed by Carlos R.A. Jones.
Holland joined the University of Massachusetts-Amherst Music as its first full-time hip hop dance professor in the fall of 2022. He’ll be premiering his one-man show “The Adventures of Maxx Lancaster” in the spring of 2023, and he’ll perform a solo from this show during this performance for Salve Regina.  Holland was also recently able to come to Salve Regina to conduct a hip hop workshop for Salve Regina’s dancers.
Duane Lee Holland, Jr.

Carlos R.A. Jones
Jones, associate dean of the School of Arts and Sciences at SUNY College at Buffalo, was a contributing author to the book “Jazz Dance: A History of the Roots and Branches” in 2014, a book co-edited by Lindsay Guarino, associate professor of the dance program at Salve Regina. He was the co-editor with Guarino in a new book entitled “Rooted Jazz Dance: Africanist Aesthetics and Equity in the Twenty-First Century” in 2022. Both of these books have continued to change conversations on jazz dance by identifying the roots of the form in Black American people and culture, challenging a century of misappropriation.
Carlos Jones’ piece is a celebration of jazz dance. “At the root of the jazz and African American experience is freedom within constraints,” Jones described. “The tension of this duality bears a spirit that carries authentic and liberating joy.”
Students in the dance major at Salve Regina are excited to be part of this special performance and to examine storytelling and art through the lens of Black culture and social justice.
Morgan Dubay ’24, a double major in dance and psychology, will be performing in “Hattie Mae’s Jook Joint,” as well as Jones’ piece. She was excited to be part of Reed’s “Hattie Mae Jook Joint,” and she said the experience was life changing.
“Not only are we learning movement and music, we are learning the social and cultural context along with it,” she said. “As a white woman, at times it feels inauthentic telling a story that is not of my lived experience. However, as a white woman, I have a responsibility to share this story as it was given to me: authentically and confidently.”
Morgan Dubay ’24
Dubay also enjoyed Holland’s hop hip workshop. She believes that the workshop was an advanced form of research through practice. Through it, she learned that hip hop is the true experience of the American people, specifically the Black and Latino communities.
“Professor Duane Lee Holland was a walking encyclopedia,” she said. “He was able to provide context, citation and content for every single hip hop skill and groove. His love for dance was so present in his teaching and his passion lit a fire in me to continue this work, even when it gets hard.”
Brianna Brown ’24, a psychology major and a theatre minor, has enjoyed the entire creative process of “Hattie Mae’s Jook Joint,” and she compared it becoming like a family.

“The entire process in itself has created such a familial atmosphere, and I have so many new friends coming out of this project,” Brown said. “I think jook joints have always represented family. You come to dance, eat, sing, and have a great time with friends that are your family …. I have also learned so much in terms of collaboration and what it means to create a musical from the ground up. It’s really cool to witness and be a part of.”
Brianna Brown ’24
The performances will happen on Thursday, Nov. 10, at 8 p.m. and Saturday, Nov. 12, at 2 p.m. Tickets are free for Salve Regina faculty, staff and students; $15 for general admission; and $10 for military, seniors and children under 12. To register, go here.
This performance was made possible through an Antone Grant, which enabled Guarino to host artists on campus who could teach African American social vernacular dance to Salve Regina’s students through their lived experiences.  This work deepens the jazz focus of the dance curriculum, where conversations around identity and culture are central to the practice. The grant also made possible to offer the show free to Salve Regina faculty, staff and students.