SHARE
The upcoming World Cup in Qatar has become the World Cup of discomfort. The Guardian recently reported that at least 6,500 migrant workers have died in Qatar since its allocation in 2010. These are mostly workers from countries such as India, Nepal and Bangladesh.
According to a recent opinion panel conducted by the Dutch news programme EenVandaag, only a quarter of national team supporters appear to be looking forward to the World Cup that will start in a few weeks. Dissatisfaction with the inhuman working conditions during the construction of the stadiums in Qatar, is the main reason for the depressed mood. It is hard to cheer your team while so many people have died.
Solidarity supporters
In the coming weeks, by wearing the Qatar mourning band, we can show that while we support the Oranje, we also reflect on so much suffering and great inequality in the world. The mourning band also reminds us of the people who left their home countries to work as construction workers in Qatar and paid for it with death. All in the hope of using that little income to support families in their home country. 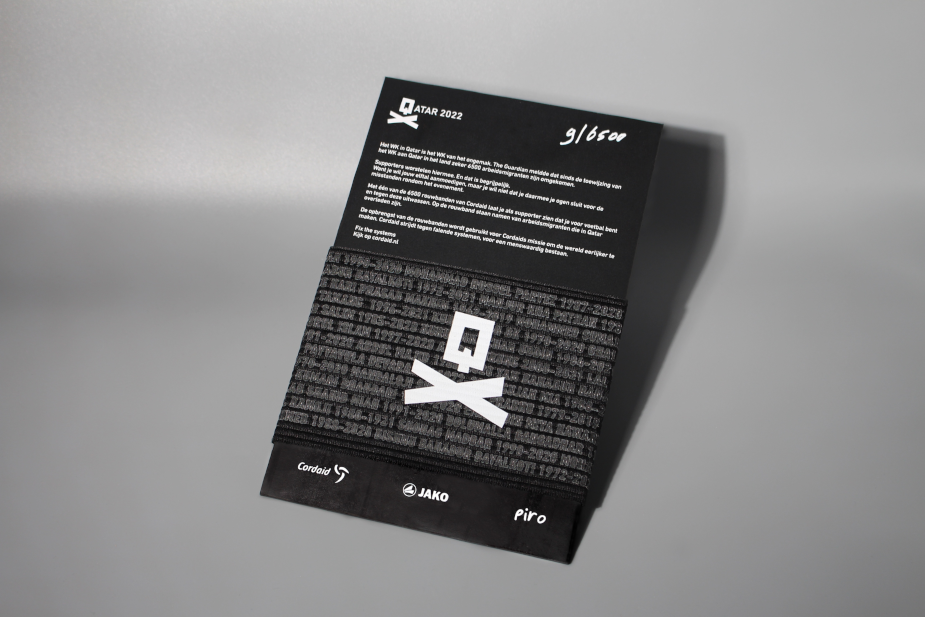 Cordaid developed the mourning bands in collaboration with sports label Jako. Barry Pirovano a.k.a. Piro designed the band. He is known for the Eredivisie ball. The names of deceased migrant workers are printed on the mourning band. They symbolise the estimated 6,500 migrant workers who died in Qatar. Therefore, 6,500 mourning bands will be produced on a one-off basis.
Cordaid is internationally operating value-based development and emergency relief organisation, working in and on fragility. Its mission is to make the world a fairer place. Cordaid fights against failing systems, for a dignified existence for all. Cordaid -together with its partners- works to ensure that people from countries like Nepal and Bangladesh are given opportunities to build a good life in their own country as well, so that they do not have to surrender to exploitation and oppression.
The Qatar wedding band can be ordered online only in the Netherlands and costs €9.95.
Categories: Awareness, Corporate, Social and PSAs
Tue, 08 Nov 2022 16:47:30 GMT
v8.5.0