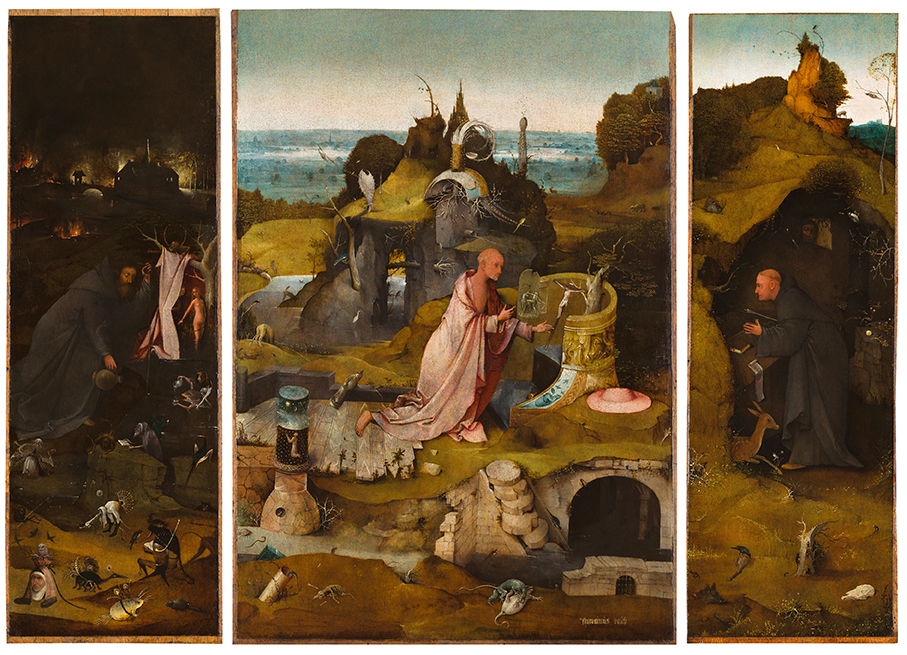 Hieronymus Bosch, The Hermit Saints (c.1495 – 1505), oil on panel © Gallerie dell’Accademia, Venice / By permission of the Ministry of Culture

Few artists have become so deeply embedded in our collective imagination as Hieronymus Bosch (c.1450 – 1516).
Born in ‘s-Hertogenbosch, a city in the south of the Netherlands, Bosch rose to prominence around 1480, at the height of the Early Renaissance, for his painstakingly detailed paintings describing the social and political convulsions of his era.
Rife with symbolism and layers of interpretation, much of his work heavily relies on a gruesomely vivid imagery drawn from Christian iconography, one that has secured his lasting fame and set him apart from his peers.
Unlike other Early and High Renaissance masters, such as Leonardo da Vinci (1452–1519), Bosch, a fervent catholic, was in fact less interested in in the revival of Classical learning, in depicting man as the centre of the universe, and more concerned with their ultimate fate.
The artist’s preoccupation with bringing a moralising massage to the attention of the commoner reflects in the sheer brashness of his artworks, where the monstrous and the grotesque overlap and merge into visual exhortations to live a righteous life.
Bosch’s inventive pictorial narrative is populated with allegorical characters, with saints, sinners and temptresses, and with strange beings, bird-headed abominations and other monstrosities that are perhaps more in keeping with the late Medieval tradition than with the Renaissance one.

Bringing together a hundred works of art, including paintings, sculptures, tapestries, engravings and bronzes, a new exhibition at Palazzo Reale in Milan – aptly titled Bosch and another Renaissance – charts the legacy and influence of the Dutch artist, while adding nuance to our understanding of the Renaissance period.
The exhibition showcases some of Bosch’s most celebrated works, including the The Hermit Saints (c.1495 – 1505), The Last Judgement (c.1500), St. John the Baptist in the Wilderness (c.1495), The Garden of Earthly Delights (c.1500), as well as artworks by other Flemish, Italian, and Spanish masters of the Sixteenth Century to highlight the richness and diversity of Renaissance art.
The show further includes Tríptiko, an audio-video installation by Karmachina – a Milan-based design firm specialising in multimedia storytelling – offering a unique and immersive experience into Bosch’s murky and carnivalesque world. 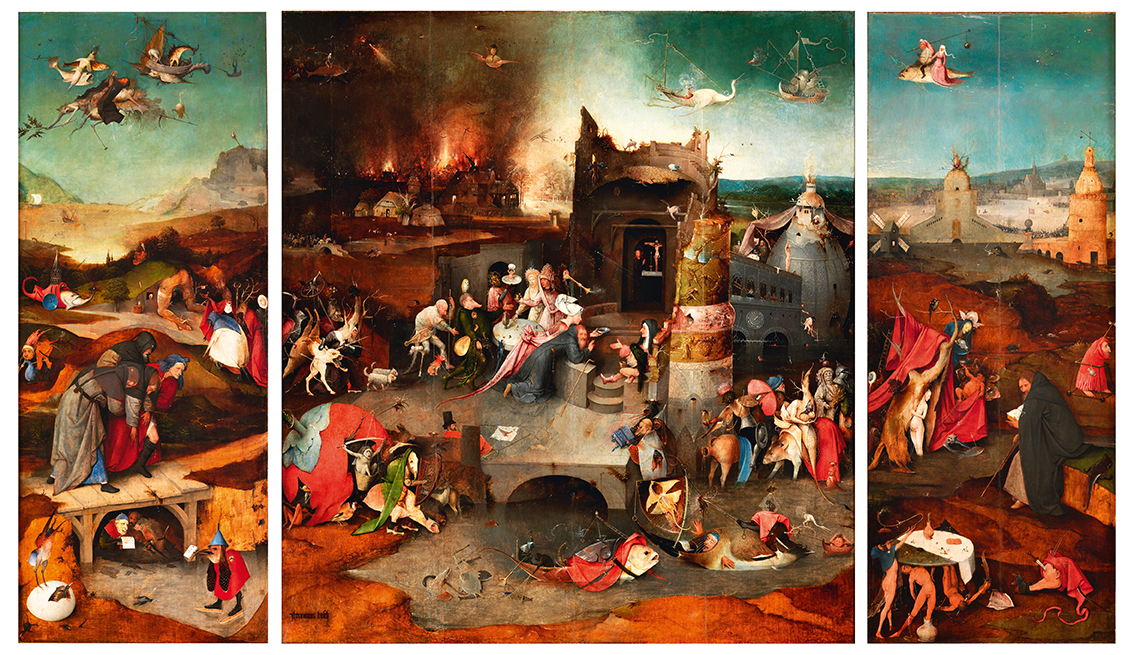 Among the artworks on display is also the Triptych of the Temptation of St. Anthony (c.1500). Recounting the story of the mental and spiritual torments endured by St. Anthony the Great, the three-panelled painting is possibly one of Bosch’s most defining works.
It displays a theme much favoured by the artist, the temptation and loneliness of the just man, chased and hounded by the relentless forces of evil. The work is replete with symbolism and Scriptural references, and it teems with creatures innumerable – demons in holy vestments, anthropomorphic deers, bird-like ghouls with skates, ship-shaped birds, flying fishes and half human-half pig hybrids.
The bizarreness and uniqueness of the scenes are such that we cannot but appreciate Hieronymus Bosch’s greatness as an undisputed master of his time, and acknowledge how modern painting, and the Surrealist movement in particular, is indebted to his oeuvre. 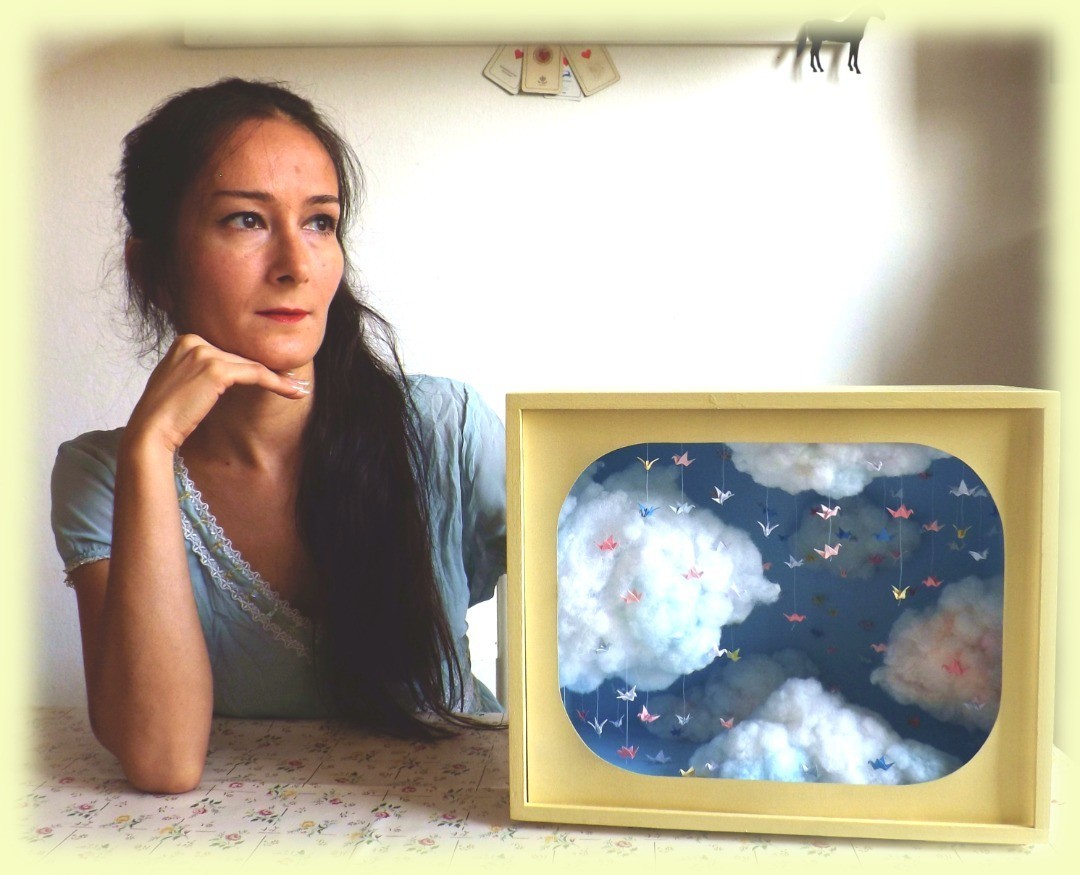 Simona Cozzupoli with one of her shadow boxes

For the duration of the exhibition, the museum’s gift shop will showcase a selection of glass-fronted cases by the highly talented Simona Cozzupoli, a Milan-based artist we featured in 2021 – one more reason, if any were needed, to visit Bosch and another Renaissance!
The works on display in the shop bear visual similarities to Bosch’s: like the Dutch artist’s paintings, Simona’s shadow boxes are in fact crafted with a painstaking attention to detail and loaded with symbolic meaning.

A collateral event of the 59th Venice Biennale, Uncombed, Unforeseen, Unconstrained brings together eleven internationally renowned artists to reflect on topical issues that range from environmental pollution and global warming, to systemic racism and rampant
Robert Nava has made a name for himself with his canvases depicting otherworldly creatures hovering between the mythical and the supernatural. Shaped by a range of different inspirations, they are rendered in a deliberately naïve
1883 Arts Editor sits for a chat with Cj Hendry, the 34 year-old NY-based artist from Brisbane best-known for her eye-catching photorealistic drawings of luxury goods and flowers, to discuss her work and influences, and